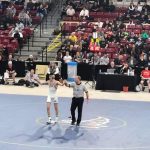 In a repeat of last year, B-CC came up short, 30-34 against the Springbrook Blue Devils, the reigning 4A state champions. Springbrook went on to successfully defend their title beating Annapolis 40-27. While it was disappointing to once again be so close to a state championship,this was an incredibly successful dual season for B-CC wrestling

In the regional duals semi-finals B-CC faced off against Urbana and was victorious, and then went on to defeat Churchill in the finals. The Barons head to North Point High School (2500 Davis Road, Waldorf, MD) at 2 PM this Saturday, February 15th to compete for the state championship.

The tri-meet opened against Walter Johnson and was a lop-sided contest as the Barons won all 14 matches, including 8 pins. Of note, Christian Simpson secured a first period pin against Ari Kefer, the #3 ranked MoCo wrestler at 113. The final score was B-CC 79, Walter Johnson 0. B-CC’s second contest was against Whitman,

Ike Guttentag, Lance Lorenzo, Aidan Moffitt, Jeo Martinez Evan Wassmann and Noah Bowers all pinned their Wootton opponents. Sam Moffitt, Drew Guttentag and Emmanuel Oladapo won their matches and Nick Scott and Graham Blondes received forfeits. With this win B-CC’s record improves to 12-0 placing them at the top of the 4A West Region and