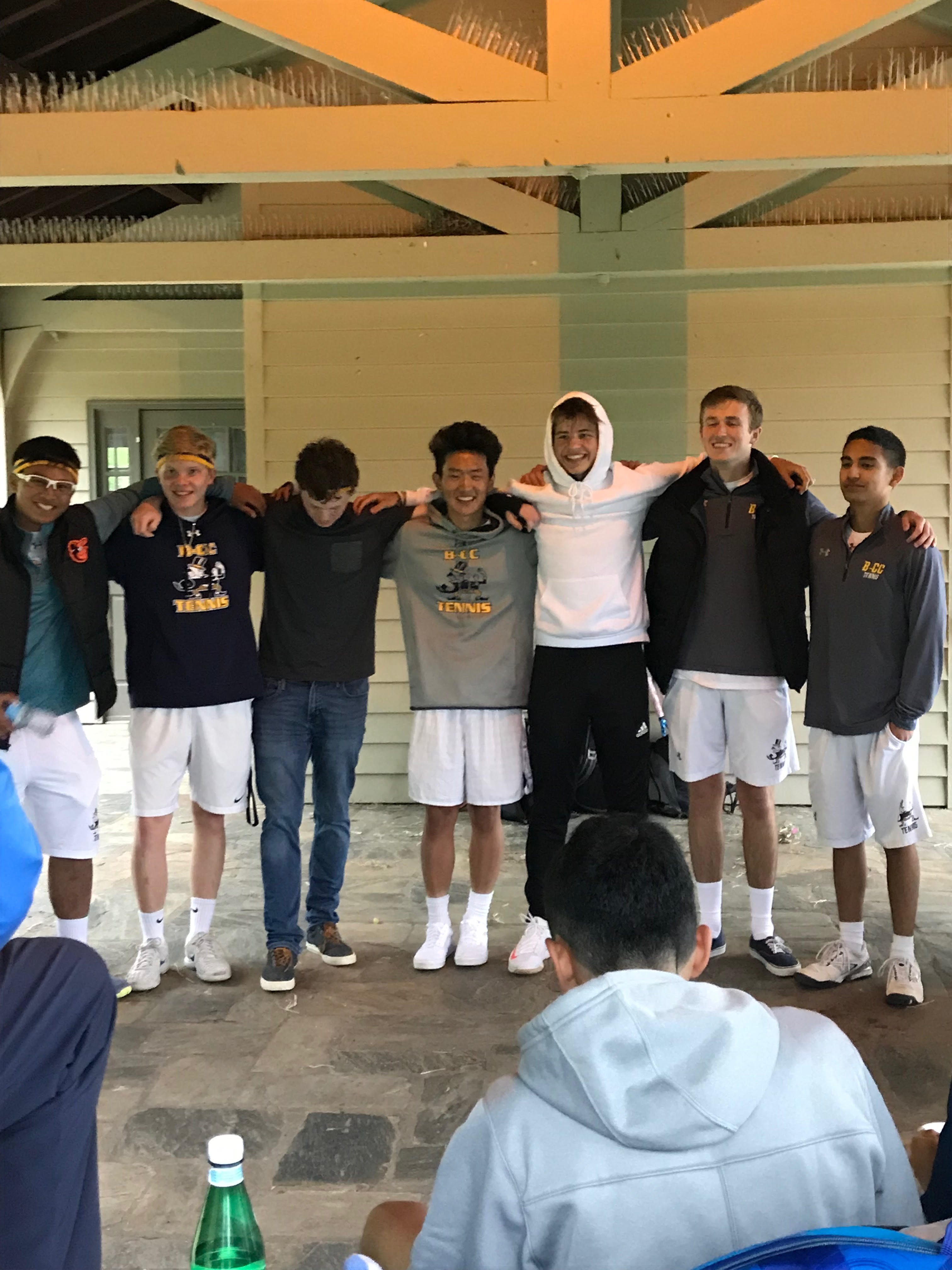 Today B-CC came out to play, and to play in style. Especially the seniors. The Barons did not disappoint their supporters, and swept to victory, 7-0.

The scores told the tale. At first doubles Sophomore Elliot Lovinger and Senior Garmani Thein made short work of their opponents, winning 6-1, 6-0. Senior Calum Fraser and Garrick Adams at number two doubles were equally efficient, dispatching their opponents 6-0, 6-1. And not to be outdone, at number three doubles Seniors Victor Platzer and Andrew Cha defeated their opponents 6-0, 6-1. In a tribute to all the kids, the matches were spirited and filled not just with hard fighting on both sides, but with more than a measure of good fun. That said, the outcome of the overall match never seemed to be in doubt.

At number two singles Junior Zach Martel had a tough matchup. Hitting topspin off both wings, frequently going for the lines, while his opponent played a game of touch, punctuating his shots with slice forehands as often as his backhand. The match was highly entertaining in the first set close, until Zach eventually pulled away. He prevailed 6-3, 6-0.

At number three singles, lanky Freshman Jax Khademi raced through his opponent 6-0, 6-1, while at four singles Senior Santiago Lagos played brought home a 6-2, 6-3 victory. By this stage, B-CC had won the match, but there was still one more match being played: an epic battle at first singles between Sophomore Nathaniel Winik of B-CC and Sean Billerback, the Senior from Blake.

To watch Billerbeck in action, one couldn’t help but be impressed. His first serve probably clocks in around 115 mph, he arches his back and gets a high kick on his second serve, and he pounds his two-handed forehand with the precision of a radar gun. Give him an inch, and he will take a mile, overwhelming his opponent.

This match was a battle. Winik hustled around the court, making Billerback work for every point. He served deftly, a combination of slice serves and kicks; moved the ball around the court on the ground; and when he wasn’t being steady– his backhand was a real weapon today – – he kept Billerbeck on his heels with his inside-out forehands and relentless net play.

The first set went back and forth until Billerback broke Winik at 4 all and served for the set. Winik dug in and saved three setpoints, and after many deuces, went up 6-5 himself. Not to be denied, Billerbeck kept pressing him. Winik went down triple setpoint in the tiebreak, 3-6, but came back and pulled ahead to 7-6, yet failed to convert his own setpoint. All told, Winik saved seven setpoints, but Billerbeck won the thrilling tiebreak 10-8. Winik kept his wits about him, and at 2 all in the second, raced through 9 straight games, pulling ahead 6-2, 5-0. Down match point Billerbeck rocketed a forehand down the line, that looked like it could’ve been hit by Novak Djokovich, but in the end Winik served it out for an exciting 6-7(8), 6-2, 6-2 win. Somebody shouted “did it,” and that well could’ve been the creed for the entire team.

Junior Zach Martel capped of the afternoon with a touching tribute to the departing Seniors. A mix of funny stories from this season and past, as well as touching memories of the camaraderie of the team.

The Varsity Tennis Barons finish the 2019 season 8-3 (including a stunning victory over Whitman). Good luck for Counties and best wishes to our seniors: